Tikibi are a beast of burden unique to world of Wukrii. They are herbivores, and a chimeric species that have the physical stature of large birds, but they also have pronounced mammalian facial features and a feathered but flexible cat-like tail. They can be found roaming the landscape in herds while trying to find food, but have also been domesticated by the locals for centuries now. They make a very unique “Kwiikuu” call that’s instantly recognizable when heard. When hatched from eggs, baby Tikibi are some of the most adorable little critters you’ll ever see, but one must exercise caution when trying to approach one while the mother is around, especially in the wild. They are very protective of their offspring (and their owners, if domesticated) and will put up a fight if they think you’re attempting to harm them with their strong clawed feet and powerful jaws. Most Tikibi are relatively friendly, but there are some that are more hostile to others, so caution must always be exercised. 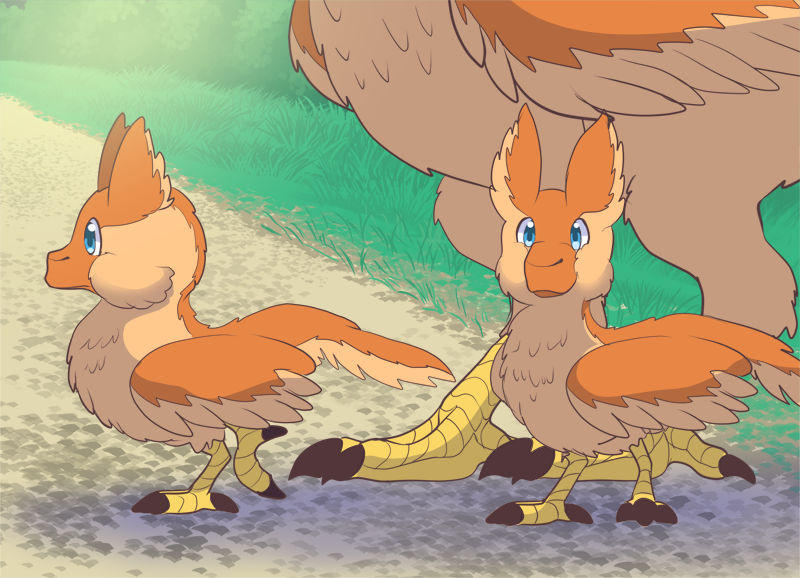 They’re mainly used for transporting both goods and people all over the islands. Their stamina is like no other and can carry a heavy load for miles without stopping. While cars and other vehicles have slowly become more commonplace in the area, Tikibi are still the dominant mode of transportation for many, especially in locations where there’s no easy access to roads or trails, as much of the islands are still wild and untamed and tikibi are exceptionally skilled at traversing a wide variety of terrain, ideal for enterprising travelers, explorers, and merchants. Tikibi are known for being highly intelligent and can understand human commands and gestures, much like a dog. It is said there exists rare Tikibi that can even understand and speak human languages, but those are regarded as myth and legend by modern day Wukriians. 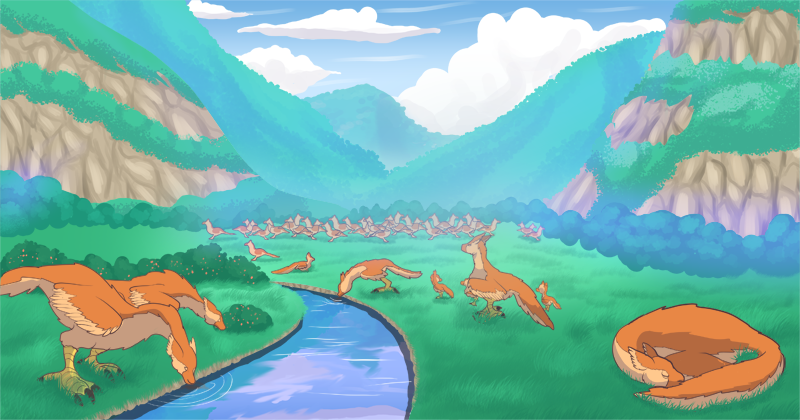 Tikibi are known for their quick footspeed, and because of this, are ridden in competitive races. Proper training and trust between the rider and tikibi is required to effectively ride one of these impressive creatures however. You’ll want to make yourself familiar with the eating habits of our fine feathery friends, because with all that power comes a pretty voracious appetite. Tikibi love a wide variety of seeds, nuts, fruits, and veggies that grow throughout the islands. Special attention should be paid to the type of food you feed your Tikibi, as it can dramatically alter their abilities for better or worse, like running, jumping, gliding, and more, with new food combinations and abilities regularly being discovered by breeders and competitive racers alike.

In fact, you can often get insight into their diet by the color of a Tikibi’s eyes, which temporarily take on the hue of the food they eat, and serve as an indicator as to what enhanced ability they may have. Breeders pride themselves on finding new foods to enhance their prized Tikibi, especially for use on the racing track. But one must be selective with what they give them when testing different types of feed, as the wrong combination that disagrees with their stomachs can cause them to give off a noxiously foul odor which they are not shy about letting out. In some cases the wrong food or combinations of food can cause a Tikibi to become ill, or reduce one of its abilities, instead of enhancing it.  Tikibi breeding is both an art and a science.