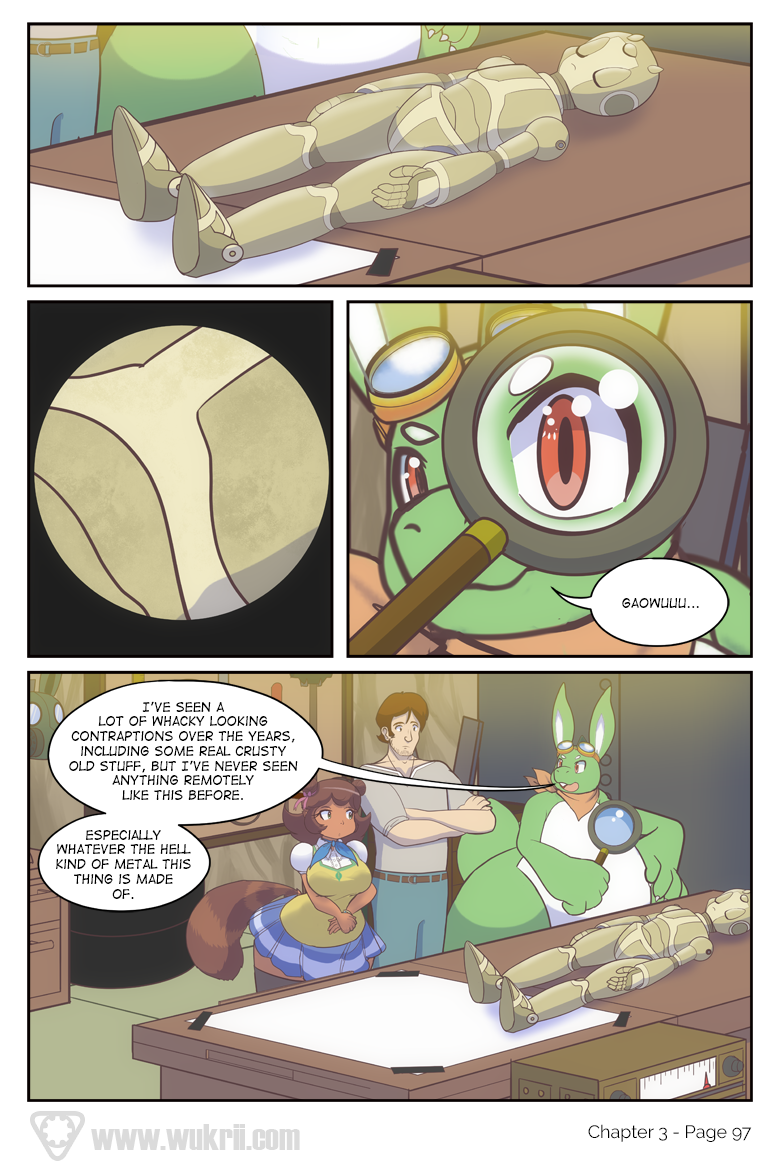 Spoiler alert: The robot was actually created by an ancient religion whose purpose is to combine and repair the fragments of an ancient, mechanical, transdimensional god.

Rao’s going to need more then a screwdriver and a hammer for this job!

Try cleaning and polishing it–after all, look what that did for Aladdin’s lamp. ^^

I guess they shouldn’t have had it covered up in the truck. It would have been able to soak up plenty of those solar rays while on that long drive.

A good cleaning would help wake anyone up!

My guess is that the metal is Orichalcum, judging by the bronze-like color. In Greek mythology, Orichalcum was a nearly indestructible metal, nothing mortals or most monsters did could break it but the most physically capable of the gods and some of the monsters that could match them for power do have sometimes bend or break the material, but they to really put most of their power into it. FYI, you can make IRL Orichalcum, it just won’t have any of its mythical properties, IRL Orichalcum is a variant of bronze with a little extra tin, so it has more of a bluish tint than standard bronze.

On the note of Fantasy metals, Adamantine gets its name from Adamant. In Greek mythology, Adamant is a dark-colored indestructible stone, literally, nothing had the power to break it, and the only ones with the power to shape it were Gaia and her chosen few. Chronos’s scythes were actually said to have their heads made of adamant and the knife Zeus used to cut open his father’s stomach to free his siblings was a sharpened adamant blade that Gaia had given him for the task of freeing his sibling. Also, Diamonds were actually called Adamants up until around the 19th century, according to some sources I’ve read through.

I hope you enjoyed this trivia moment, and I hope some of that rambling helped.

That’s some cool bits of trivia! Thanks

hvgtd ! I love reading up a lot about different mythology heavily used or inspired in fantasy and other fiction. Though Rao better hope that this isn’t some mystical metal he’s dealing with. He may have to go and search for a wrench made out of adamantine!

That magnifying glass also magnifies the anime of Rao’s eye.

The robot was much dirtier than that when we last saw it, Rao must have cleaned it up to get a better look. Definitely seems like any grim was skin deep and the robot is fully intact.

Most likely Mathew and friends gave the machine a light cleaning before putting it into the truck. Jigin wouldn’t want it dirtying up his “perfect” truck after all.

Yes hello, the illustrator wanted flex with how good they are at drawing features of eyes and lenses.

Eye see what you mean!

looks as Rao is either about to become Doctor Rao or Scientist Rao of the Mechanical world with this mechanized child sized robot, what secrets could he uncover in just a few hours with it i wonder?

Probably some kind of ceramic composite

It’s the product of a forgotten civilisation , Rao . You have to find the “Memories of osamu Tezuka” to understand exactly what is it

I could totally see Rao being a big Osamu Tezuka fan!

I’m going to be mean and say that Rao most likely saw nothing of importance at all. He has no idea what that thing is, what it does or what its made of. He *is* impressed however, but will that we enough to figure the ancient secrets of

Find out next week right here at https://wukrii.com/ !

It’s definitely not something Rao would have lying around in his spare parts room!