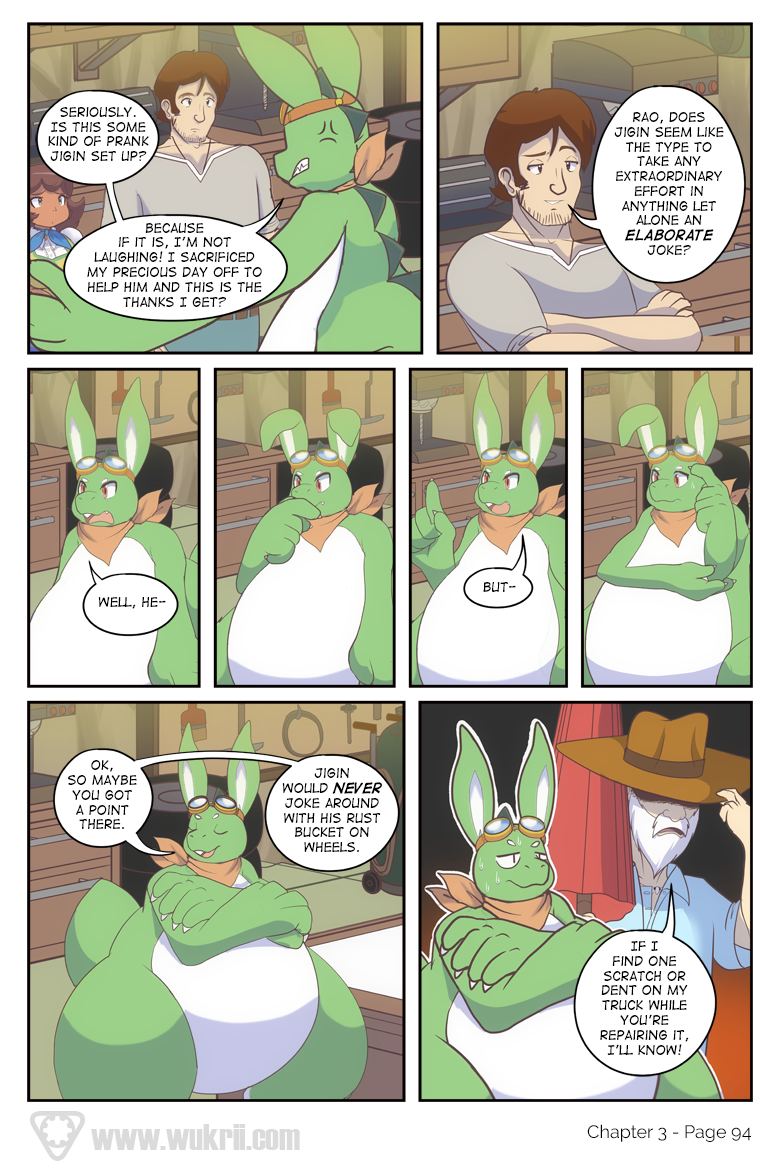 Well, it is good to see some common sense enter the debate.

Let us hope that it stays there.

Mathew being the voice of reason! There’s no joking when it comes to Jigin’s truck!

Ha looked like he got progressively wider the deeper in thought he gets.

Even Rao knows Jigin enough to realize he would never let anyone touch his precious rust bucket without a good reason.

Sounds like Jigan knows how to intimidate. And now they can finally get around to telling Rao the reason for the visit.

Also, I have the feeling Mimi is going to ask for details on the statue before they leave so she can try recreating it, but could just be me.

If you’ve been around the block as long as Jigin has, you know how to put the scary face on.

Jigin: and it won’t be mechanical nicknacks you’ll be worried about collecting and fixin, no it’ll be hard knocks, ya hear?

Jigin maybe old, but if his reaction to thinking he was being robbed by bandits was any indication, he’s not afraid to get a little rough.

Who knows? Maybe now he knows it’s not a prank and is some ancient, or at least unknown, machine he may get much more enthusiastic and forgive the lost rest day.

Yeah Jigin doesn’t do elaborate, especially if that last panel is anything to go by.

You know Rao is in deep thinking mode when his ears move with his emotions.

At least Rao is putting some logic together and seeing how more serious the situation is. The day wasn’t a total lost though. He did get fed breakfast.

Jigin is a man of few words and fewer patience when it comes to his truck.

well at lest the man makes good on his words, I know i wouldn’t want to deal with old man Jigin’s if I accidently damaged his truck while repairing it, after all he looks like he could be Master Roshi’s twin brother from DBZ only less perverted, but in reality he’s more of that sweet old grandfather who could kick in a court door down, which mine did, kind, old, and gentle, but never someone you want to make anger, his old school biker days kick in and from there just hope he’s not in the mood to kick butt,… Read more »

Jign’s definitely the type you got to earn your respect from. You know you’re in his good graces if he lets you near his truck without him around.

aren’t all old guys who love their antique cars and trucks like that especially Jign in which case, i respect a man who treats his car or truck in a way they would their own children, makes him seem more like a man and darn good friend

Jigin cares more for that truck then any ancient wukriian artifact! Rao has to take special care when repairing it.

Welcome to the Wukrii community

Wait a minute , Rao is sweating in the last panel ? 0_o
Jigin is so “frightening” than this when angry ?

Jigin’s a force to be reckoned with if you mess with his truck!

Somewhat odd wording in the last panel. “If I find one scratch or dent on my truck while you’re repairing it, I’ll know!” Well of COURSE you’ll know, you just said “if I find it”! Kind of hard to find something and yet still not know it’s there.

A better wording would be “if YOU LEAVE one dent…I’ll know”.