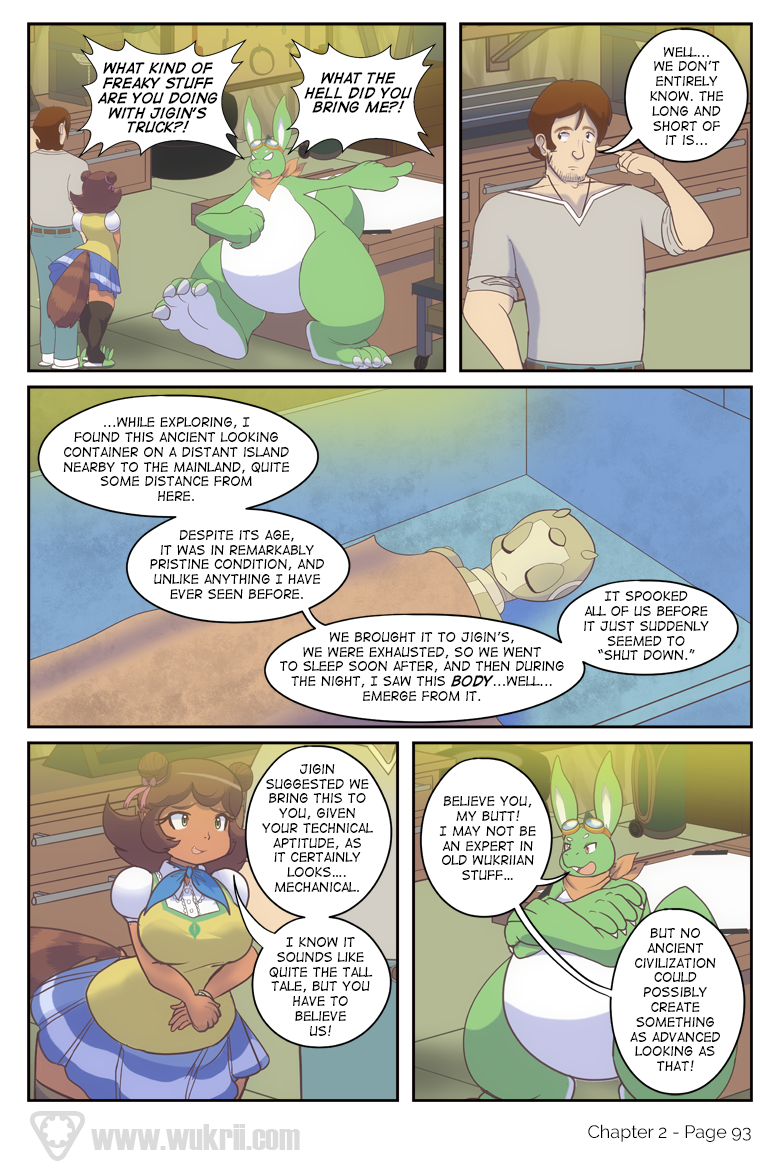 I’d probably react the same way. It sounds like something right out of a comic book.

It still took Matthew two panels and five word bubbles of mostly non-essential detail to say “I found it hidden on a distant island. I don’t know what it is, and I was hoping you could help me.”

If he writes like he talks, it would take him a whole book just to describe putting his shoes on and walking to his motorbike to start his next trip.

I’ve read books like that. Mostly old ones. Rao has a positively 21st-century attention span, whereas Mathew may well be a gentleman-explorer of the old school.

It’s essential to Rao, he doesn’t know any of this. It’s fairly concise for someone talking about a fairly lengthy and an unusual story.

Well to be fair, as someone who is an expert on all things mechanical, AND as someone who has been living here for a while, it makes sense Rao doesnt believe them. I dont know who would!

Rao’s all about knowing the latest and greatest in his mechanical field, so it’s going to be hard to convince him that there’s something more advance out there that he doesn’t know about.

Look on the bright side Rao, now you know you don’t have to fix the truck again!

Some people may accuse Matthew of ranting but if they want Rao to help them he deserves to be given the full context about it’s discovery and antics.

Matt may also have been hoping that, by sharing discovery location and the container facts, Rao would already know something about it, but alas the drabbunny is in the dark too.

If they expect Rao to be all onboard with this, they need to come clean with everything they know on the about this mysterious mechanical artifact.

Well Rao has that drabbunny dark vision, so he’s usually in the dark.

Assuming this thing isn’t ancient, that would mean that someone built that thing and did it up to look much older than it actually was then hid it in such a way that it looked like an ancient artifact just for a joke. So, assuming Rao is right about ancient civilizations in Wukrii not have the technical expertise to make something like that, the real question would be, who would have the resources and ability to make something like this?

That would certainly bring up more questions if that is the case!

more importantly, the sense of humor!

Rao’s going to be waiting for that punchline!

Ancient civilizations always had access to technology far more advanced than our own to the point where you have to wonder how their civilization crumbled without a trace.

maybe rather then crumble, they left.

The more advance , the more possibility for things to go wrong.

I dunno, there were discoveries showing the old times had much more solid concrete mixtures (No pun intended) that still withstand the test of time while current ones crack in a less than a season. Also there were toilet systems that were advanced and rather low maintenance for the time that were wiped away thanks to time conflict. …No pun intended really.

Who knows what kind of hidden advance tech can be left undiscovered my modern man. Maybe one day we’ll discover an Egyptian version of the mechanical man.

How rude Rao is in the last panel . As punishment , he’ll be butt slapped ….. Errr , we need a big spanker

Ouch, right in the Drabbuns.

huh, he seems to have taken it rather well, but when faced with an impossible task of no knowledge on it, he’s about as useful as a modern day mechanic who doesn’t know anything about old car engines that have a fuel in take like the old German Messerschmitt series planes had of course, as any good classic vehicle lover would know, it just makes the engine work a lot better, and allowed the aircraft make tighter moves and make the more impossible turns without the engine stalling, also better known as the fuel injector to inject gas, diesel, or… Read more »

The V1, or “buzz-bomb”, on the other hand, used carburettors. These didn’t work properly when they nosed over for their final dive, so they were turned off first. This meant that they didn’t hit quite as fast as they were supposed to, but the psychological effect of hearing the pulse-jet suddenly cut out may well have been even more detrimental to the British war effort.

yes, the Germans built them into their fighter plans to have the advantage over the British aircraft, by pumping fuel into the engine it didn’t stall when doing negative g dives while dog fighting, it’s what made the Messerschitts such a deadly advisory in the skies combine that with the turn time propeller when it fired it’s machineguns and you had a very dangerous enemy on your tail, the Me BF 109E/Z was one of the several first WWII warplanes to have fuel injectors, just about every single engine German fighter had one granted it had a few draw backs… Read more »

Poor Rao himself is probably unsure if what he’s looking at is even mechanical or not. If he does decide to help, he’ll certainly have his work cut out for him.

You would think a guy who lives out in the middle of nowhere sticks would expect to be blindsided by developments in material science, new fields of mechanical design and the maturation existing fields.
but no.

Behold, all 2,5 tones worth of drabunny jiggling in shock and anger.

Mathew and Mimi are going to have buy a lot of apology carrot cake donuts to calm down this hopping mad jiggly drabbunny!

Finally, they’re able to explain why they’re here.
Maybe the shock has brought Rao back to reality.