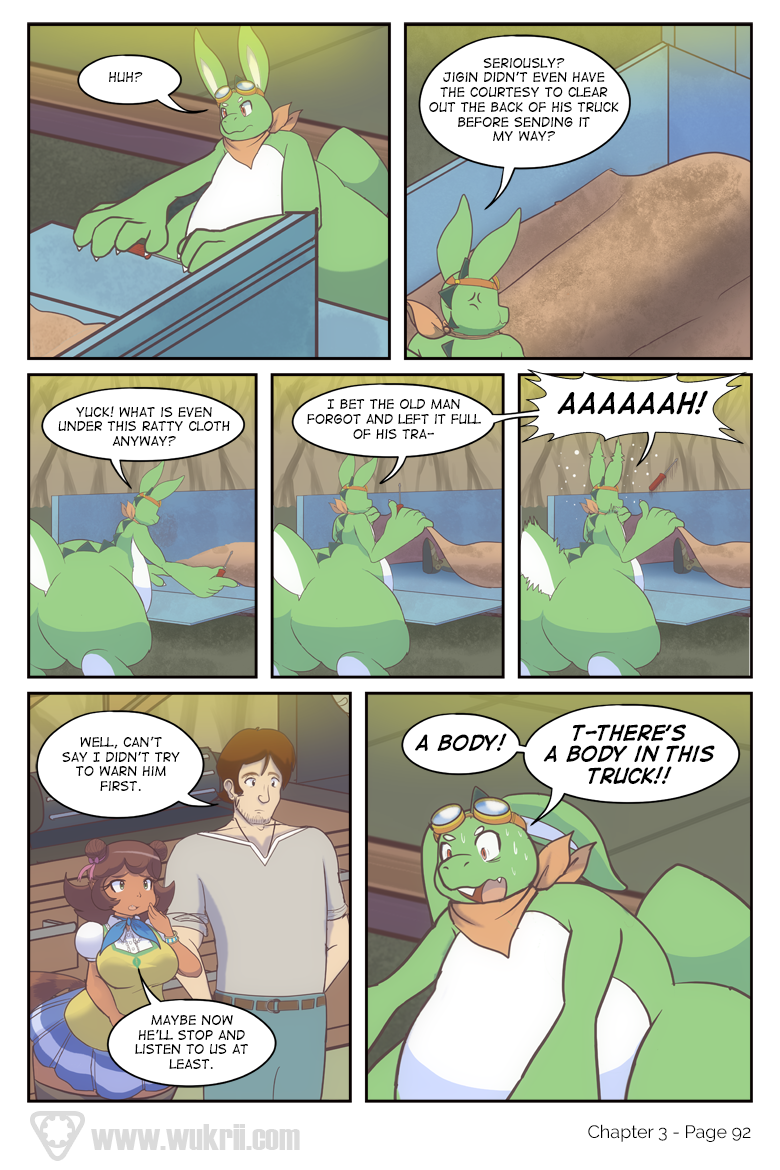 I see an big overreaction in the future.

Big drabbunny, and even bigger overaction!

Actually, Matthew, we can say EXACTLY that. From the time you appeared at his door until now you missed chance after chance to say something–you can’t only count the last thirty seconds.

And I’m afraid that Mimi might be wrong. He doesn’t seem to be slowing his torrent of words so far.

To be fair, Mathew tried to tell Rao about the machinal artifact the first time before he again quickly assumed it was the truck that needed fixing.

You can’t be too pushy with the big guy since it is his day off. Though you may have a point that it’s going to be harder to get Rao to calm down now.

…Well, this isnt exactly what I was expecting. You would guess that Rao would notice it isnt a real body in there.

Metal men aren’t exactly common in the world of Wukrii, so seeing some sort of humanoid like figure under the covers would give anyone a fearsome fright!

Honestly, it’s his own fault for jumping to conclusions and not listening to people that came in.

I foresee Rao learning a life lesson and promptly trying to disregard it.

This maybe the unexpected turning point for Rao in regards to his life and customer service!

ah and this what happens when one doesn’t listen to the costumer on what they are trying to tell him, or in this case warn him so he doesn’t freak out, drabunnys may be part bunny and dragon but i guess it’s the bunny side that can make them freak out so easily hope no one uses that to pull pranks, may end badly for the both of them

Rao is learning the hard way about not jumping to conclusions when it comes to listening to his customers!

Certain drabbunny’s rabbit side shows more then others and Rao can certainly be frightened into a big baby bunny if he gets a sudden scare!

Not even Rao is immune to frizzy tail fright.

Though given his shorter fur post-fright grooming is less of an issue.
No Rao it’s a robot … we think. I guess it might be some kind of body depending on your point of view.

It’s a hair-raising experience for Rao, no matter how short his fur maybe!

Considering that robots aren’t really a thing in Wukrii (Well, until now maybe!), nobody’s going to blame Rao for that mistake.

This is why Ents aren’t very hasty. They don’t like unpleasant surprises

Rao should probably follow the slow and steady approach like the tortoise, even though he’s part bunny.

What you were saying , Rao ? “Nothing in this truck can surprise me anymore” , that’s it ? ………. Except maybe the fact Jigin is a serial killer ?

Luckily that it’s not the body of a drabbunny

Run Rao! Mathew and Mimi are clearly here to hide the dead body at your home!

I guess Jigin has never sent the truck over for Body-work before.

I greatly approve of the funny punny drabbunny tier joke!

Finally out of that plot cul-de-sac! Now to get this story going before Rao calls the police.

Mathew and Mimi better think of something quick then if they don’t want to be put in the slammer!

It hasn’t been established yet that Wukrii, and this particular island, even has any police… or maybe thick foxgirl would comd to Rao’s aid instead.

Kiki’s after Mathew and what he found, so I sure she wouldn’t mind taking that artifact out of Rao’s house for him.

Also, welcome to the Wukrii community

Rao’s Notes: “Today I learned two things, first is that you think you’ve seen everything, until something makes you crap bricks

, Second is that explorers and archeologists are usually and undoubtedly the Chauffeurs of said brick crap inducing things, which is why you never presume ANYTHING with what they bring you.

Now all explores and archeologist must empty the contents of their trunk or cargo beds before entering Rao’s garage!

Is that guy crazy or on fox powder?
You bet the Drabunny would RIGHTFULLY and angrily say they didnt warn him. They let Rao ramble on the whole time while they practically whispered what they were really in for until he had to remove the tarp himself the only reason they came to his place. If he thought it was a body, then he just got his dna on the evidence. That would feel like malicious entrapment to someone unknowing and trusting them less would be an understatement.

Sorry, worked with mechanics and the main rule is to never touch ANYTHING until we get that ‘paper work in’ cause if bad actors dont say something else isnt broken and we find it broken, some places would try to hold mechanics liable because the customer skewed information in an attempt to get legal compensation for fixing their junk and thinking we broke stuff to drum up cost.

One heck of a misunderstanding some would take advantage of. Heh, would love to see a fight with all that weight being thrown around.

Hm… interesting. I wonder if there are any drabunny lawyers on Wukrii?

Perhaps if they have suits tailored for drabbunny sizes.

Not sure how much Rao remembers from his old drabbunny Drumdumo fighting days.

I knew we’d get there eventually!

Now to explain everything that’s happen to Rao without him freaking out even more!

Rao might have seen all sorts of things hidden in trunks and trucks then we’ve thought!

“Where else was I supposed to put him?”