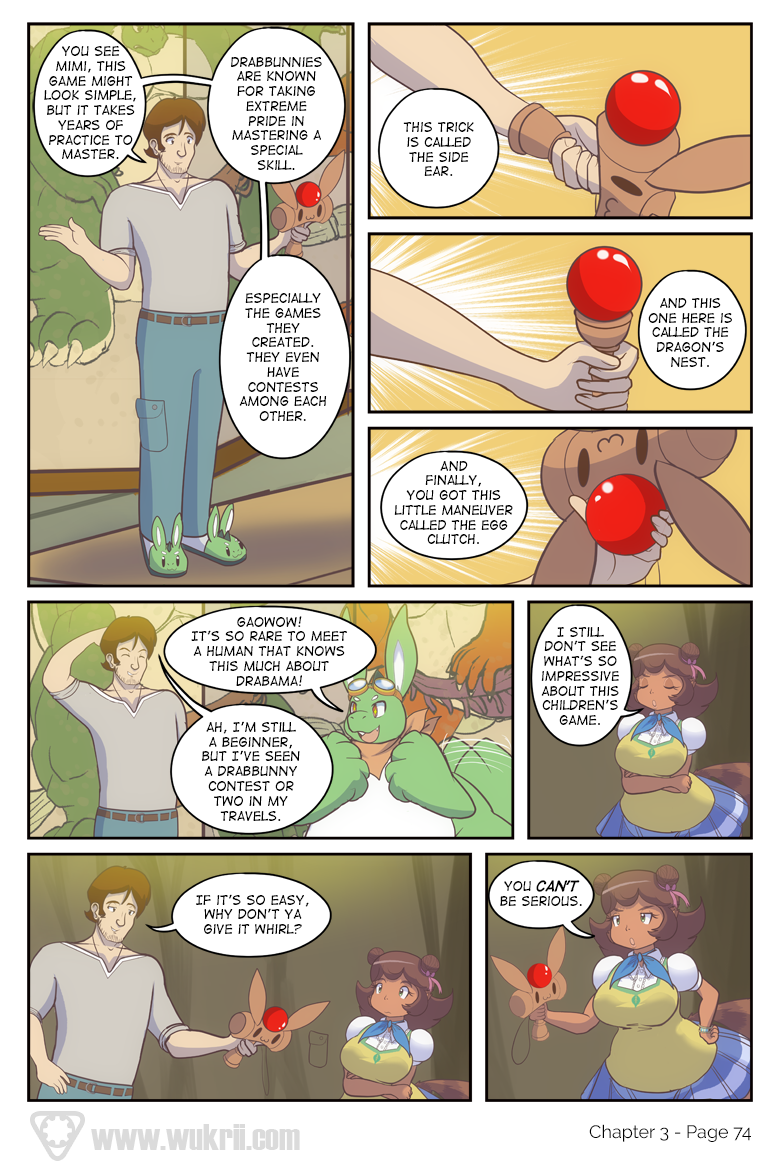 Okay she is going to get schooled

Well Mimi being the college student, this will be a great educational experience for her!

She’s been pretty obnoxious in her disdain, but then, so has Rao in his pride. One of them is going to be humbled, and I’m still deciding whose side to be on. ^^

I’m also wondering why neither Mimi nor Matthew seem to be interested in learning about the robot any more–after all, that’s why they’re there in the first place. O.o

We might get an answer after we see the kind of skills Mimi might have trying to play drabama!

Well, Rao’s still under the assumption that he’s just fixing Jigin’s old rust bucket of a truck, which he’s done a many times before. It’s probably why he’s not in a rush at the moment. Mathew and Mimi still need to think of a way to break the news about their ancient passenger in the back.

Man, for someone who is supposedly so interested in other cultures, Mimi sure seems to have little respect for foreign traditions and interests. I`m honestly surprised to see her display such rude behavior.

Perhaps actually playing drabama will expand her thoughts on it being just a children’s game.

Also welcome to the Wukrii community

I can almost guarantee that Mimi is gonna hit her head with the ball.

Mimi certainly has a history with things hitting her in the head head!

Not if she has enough experience with yoyo`s!

I can imagine Mimi wouldn’t fare any better with the other two drabbunny games out there either.

I can imagine that someone used to playing with yoyo`s would have an easier time playing drabama. There are many similarities.

Drabama is more like fancy juggling, though just like Yoyo, you have to navigate the string in tricky ways. Maybe Rao has a drabbunny sized Yoyo stored away somewhere for practice!

I aologize for bringing this up, but honestly, the game reminds me of Genis Sage’s Kendama from TOS. I can say from experience that such a toy is not easy to master, even if one is good at yoyo, as the much more limited length of string, and the constant impact of the ball hitting the sides is different in theory from the much more lax skills required for a yoyo. Plus, given that this is Drabunny tradition, any cultured person would show such a game respect, and give it a chance to honor it’s process.

I suspect Mimi is in for a rude awakening.

Also, Rao and Matthew would be perfect candidates for concentrating magic.

No apologizes needed Paintbrushdante! We were influenced by traditional Japanese toy Kendama when creating Drabama. That’s where Genis’s weapon comes from. I had to learn and look up a lot about Kendama and how it worked. From what I saw of it, it definitely didn’t seem nearly as simple to master as one would think! Now add two big bunny ears and a wider frame and you got Kendama on hard mode! Goes to show that Mathew really must know his stuff!

Mimi’s about to learn today!

Not sure if Mathew could pull a drabbunny as big as Rao out of a small magic hat though.

I see. That makes sense. I always saw Kendamas fun, to be honest, and thought they would be alot more challenging than a yoyo, and when I ordered one online, man was I right.

Genus being able to focus his magic like that by effortlessly moving his kendama in such a way requires years of practice. Lloyd is lucky to have him as his best friend.

That said, from what you’re describing, that’s kendama on steroids, and Rao, and Matthew are handling it like pros.

I cannot emphasize how badly Mimi has screwed up by thinking it’s easy. She’s about to get schooled hard. It would also be funny if she bonked her head in the head hard and tripped as a result.

Also, maybe not pull a big drabunny like Rao out, sure, but if Genis’s elemental magic skills are anything to go by, I’d say both Matthew, and Rao can probably do the same, ESPECIALLY if they’ve dealt with A kendama as difficult as that.

I’m kind of looking forward to whenever Mimi and Kiki finally encounter each other. Their personalities should be fun to see interacting with each other. Speaking of Kiki though, it’d be cool if she got a bio on the main cast page someday too!

The fur would certainty fly between those two whenever they do meet! Mimi and Kiki’s personality’s couldn’t be any more opposite of each other.

We’re currently working on a big update of the about section that will have bio’s on Kiki, Rao and much much more!

Just noticed the slippers. They look like they’re saying “Yeah! You tell her Mr.Human!”

Mimi’s out numbered in her distraught of drabama!

be warned, such games require hand and eye coordination especially a game like that one, i get the feeling this will not end well especially in the eyes of the masters of such a game, i know i would never stand a chance

Mimi’s about get a crash course lesson in how much coordination drabama really requires!

Matthew , you have nice shoes XD

Mimi knowing nothing about this game = FAIL ^_^”