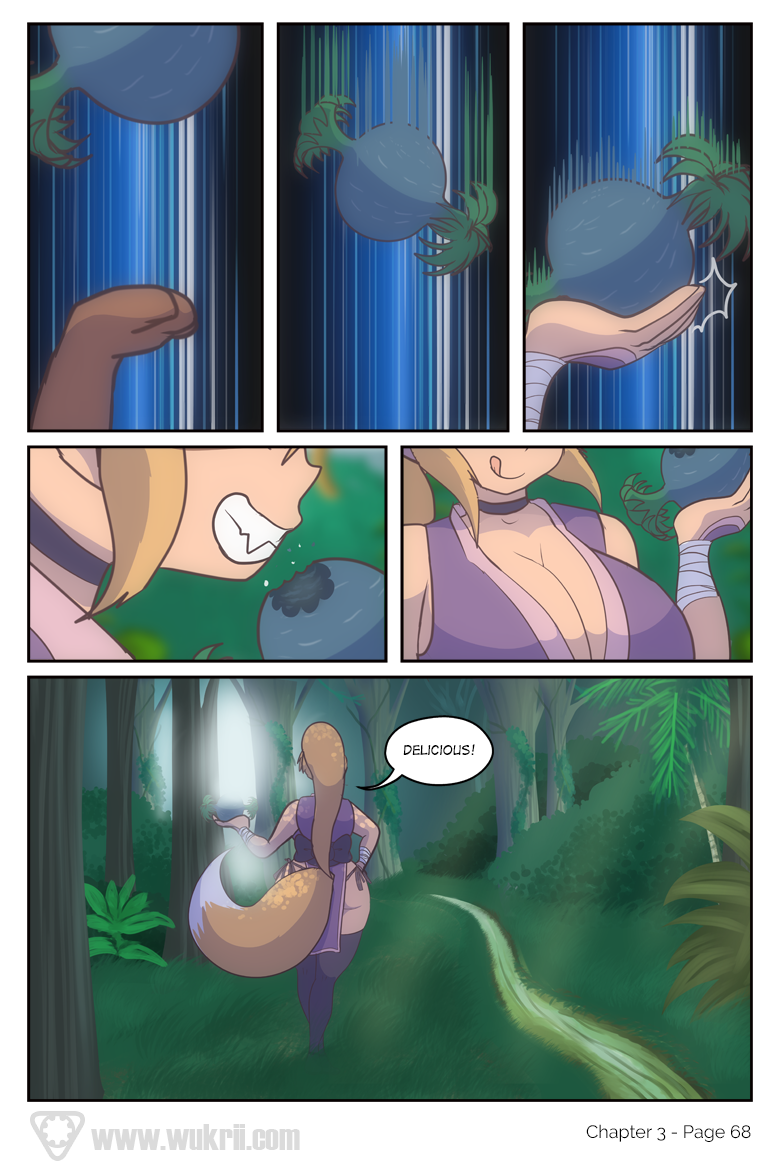 The LAST TIME she tasted one of those she called it “a bit too sour”. Is she just so hungry that anything would taste good, or is she just crowing in triumph?

In Aesop’s Fables there is the story of a fox who tries and fails to get some grapes, and finally stalks off, saying: “They were probably sour, anyway”. Here we have a fox eating sour fruit and saying it’s good. I find that hilarious. ^^

I could be mis-remembering/mis-seeing, but didn’t the previous fruit she bit into have small round things (seeds?) inside it? (panel 4 of your link) I remember thinking that it looked a bit like a pomegranate. This one has a smooth interior. Maybe the first one she bit into was overripe? Also, last time there was a sound effect when she bit into it, implying that it required more force than this time. (again, overripe? Who knows how these fruits work! Maybe their skin hardens after a certain point to protect their insides for when they fall off the trees, and… Read more »

Perhaps the Wukai keep the tastier fruit deep in the center of the forest and the not so great tasting type on the outskirts. Another mystery for sure!

Also, welcome to the Wurkii community

Perhaps it’s the type of fruit that taste better the more you eat it.

Hunger is the best spice they say, even if it’s a tad sour!

Where’s the stream ? Kiki has already forgot what Nini had said to get the correct path and leave the forest ? Guess we haven’t yet seen the end of the wandering vixen

The stream is right next to her in the last panel, though it does kind of blend in and is a little thin.

The blue stream turned in this green muddy path ?

Yep, the stream is to the right of her. It’s a bit more murky and smaller in this area then towards the forest center. Hopefully the bright light this time is taking her out!

I have a feelingly Kiki is going to get sassy with the next person she runs into, mostly because it seems to be in her nature

Wow, she’s back to being her more humanoid form FINALLY

Kiki’s back in the flesh! (But still bushy tailed.)

i can say 3 nice things about Kiki 1 shes hot, 2 she adorable and cute in fox form, and 3 she she’s probably gonna give a few guys nose bleeds

Kiki’s a foxy lady both in the literal and figurative sense of the word!

One of the reasons why Kiki wanted to take the shortcut through the forest as opposed to walking the road to avoid the gawkers!

I’m calling it now. This is the last page for this chapter, and the next one will cut back over to Mimi and uhh… David?

I think? Well finally find out one of the mysteries of that ancient automata.

Only time will tell. See you next week when I’m most likely proven wrong.

It has been a long while since we’ve last seen our original Wukrii Trio!

I hope you’re right, I want to see what’s going on with Mimi.

So, it’s clear that she’s rather… well endowed in her humanoid form. Is she equally gifted in her feral form or not? Would a random normal fox see her as the fox equivalent of well endowed? (super floofy tail perhaps? or something that doesn’t translate well in the art style? Big whiskers? Extra velvety ears?)

StarRunner Well I can’t say what the fox equivalent of being well endowed would be for sure. Perhaps her extra floofy chest?

She’s foxy in all the right ways!

And we’re back to the curves.