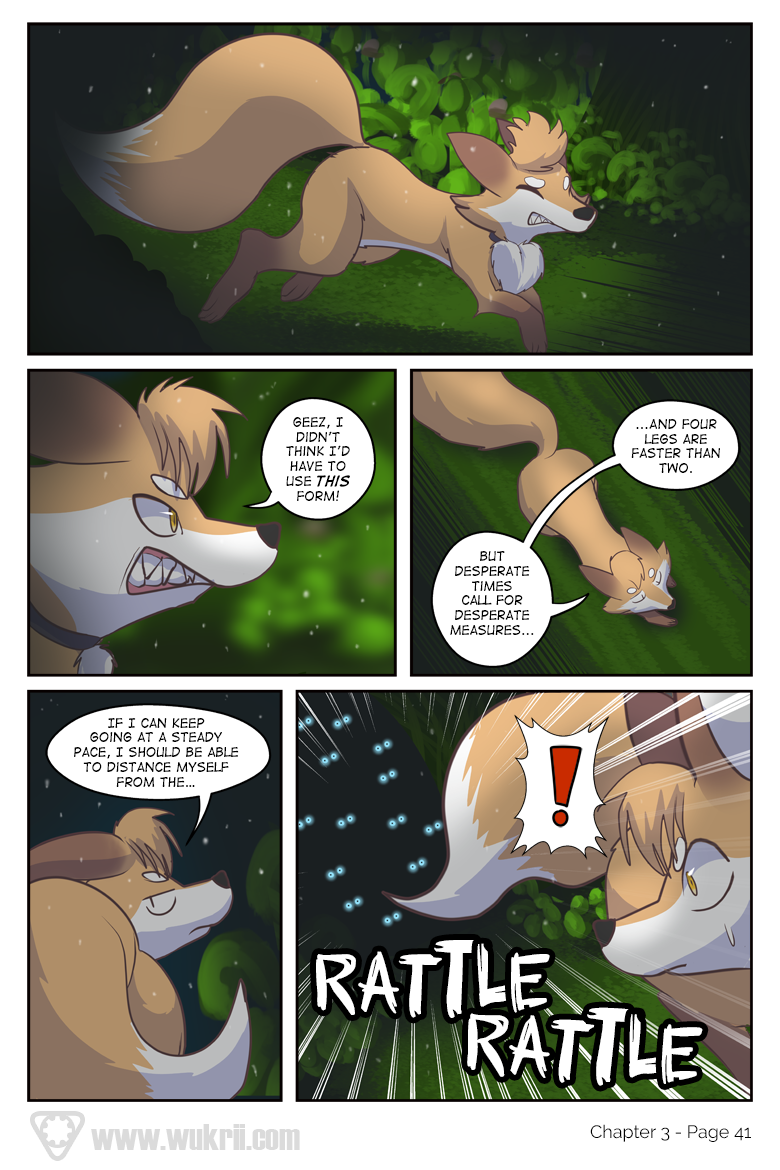 Tip: when changing your appearance to fool an enemy, DON’T DO IT WHEN THEY CAN SEE YOU.

I’m not sure if Kiki has the option to hide from these mysterious pursuers’ glowing gazes everywhere!

Her change may have more to do with gaining additional speed and agility than trying to hide her humanoid form. She is thinking on the fly as she goes however, as one does when in a state of fear or panic.

A fox can be quick, but an un-seen enemy just as quick

She needs to tap into the other power of the fox, cleverness! Out think them ninja fox, you can do it!!

Dang autocorrect, Ninja Fox is what “Him A Fox” was to say.

Ki1ri1 Man
Especially an un-seen enemy that knows the forest you’re in from top to bottom!

Plokman
The foxy Kiki needs to get foxier quicker!

It may be my tablet not showing it, but thank you for telling me.

Don’t be lookin’ at what’s behind you Kiki, just focus of running forward for as long as you can and pray to Hylia that you can out run these chicken-owl headed chimeras

Kiki’s own curiosity may end up getting the better of her if she’s not careful!

I think she just wants to see she’s making some progress!

I do think Kiki prefers her humanoid form, but I’ll be up front here. She’s a looker in humanoid (does that work as a term for her mostly human Demimon form? I do prefer to use the right terms) shape, but she is freaking adorable in Fox form! I love foxes besides domestic breeds like Dachshund, Boston Terrier and many others they are my favorite canine/vulpine breeds. I wish they could be let’s but only small portions have been bred to the point of safe handling, since that fact is unchanging a fit Corgi would look the part and I’d… Read more »

Thank you Plokman! I’m glad you’re liking Kiki in her Fox form as much as her human form!

(Also Corgis are an adorable breed of doggos!

We’re glad you like her fox form as much as you like her humanoid design! We waited a long time to show this. Her eyebrows are very bushy and expressive it’s true.

Well , maybe four legs are faster than two ; but foxes aren’t famous for their speed

I say again about cheetahs

Faster than running in human form though and for longer sprints.

Never underestimate the speed of a small canine, trust me she is going miles per hour faster now. Everyone thinks dogs with short legs are slow, they have never had a Dachshund cause despite the jokes in All Dogs Go To Heaven their short legs at not a problem. They are lightning once they are ready to roll, and they are always ready.

I know the speed of foxes , but it seems the critters are so fast than Kiki

Well…maybe they are speedy, but others up ahead are also surrounding her as she progresses?

Her ability is certainly cute and fast but as she’s still being tailed, may not be the game changer she hoped for Cute fox design with the eyebrow markings, darker legs and ears and chest fluff, I guess her bust has to go somewhere. Interesting how she refers to it as a desperate measure, is there a drawback or danger to using this power or simply a personal preference of hers? She also still seems to have her choker on, though might this be a stylistic choice? Congratulations on making the top of that imaginative webcomics article, you deserve it.

She is definitely moving faster. As far as her comments about her form go, I think she was just surprised she’d have to change into this form while in a panic on what was supposed to be a fairly leisure trip through a forest path.

i would just take a minute to say, AWWW kiki is cute in this form of hers :3

Never look back! Keep running till you can run no more

I think that’s the plan!

Don’t worry about where you’re headed. The operative word is “away.”

TB Tabby I think she is on the same page as you!

Time for an all-out scamper, Kiki.

Isnt kiki a kitsune? cant she just fly away then?

While it’s certainly possible a kitsune wukai may have additional abilities, a demimon will be more limited.

However, we do know she is able to create fox fire from her previous appearance earlier. Remember, demimon are half wukai and half human.

No problem! There are not many hard and fast rules about what traits different Demimon inherit from their distant Wukai cousins. Part of the fun is learning what those might be!

When you hide behind a tree to change your form. Most implications involve LOSING YOUR CLOTHES ONCE YOU DO. And seeing as how these things know the forest inside, and out, I doubt she’ll get out of this easily. And even if she does, SHE’S GONNA HAVE TROUBLE GETTING ANY CLOTHES BACK ON WITHOUT SEEING HER NUDE ATLEAST ONCE. In other words, either way, we as the audience will see her nude atleast once if anything. It’s also worth noting to some that her humanoid form is most akin to a Renard, or a race of fox humanoids, to be… Read more »

She wasn’t hiding behind a tree, she was in the middle of running between them, and the way we showed her form change the way it did was merely an artistic and stylistic choice. Demimon have some latent magical ability inherited from their Wukai cousins, so her clothes coming back when she transforms won’t be an issue.

You are right about these creatures though, they do know this forest very well, but Kiki’s gotta do something right? And if you are going to run, might as well run faster right? As she says, 4 legs are faster than two!

If you gotta run, run with style. She certainly is the kind to think that way, not that I blame her as the hedgehog says “If you got it, flaunt it”

Keep running Kiki! You gotta get out of this owl monkey forest before they catch you!

“…imminent and persuing doom” is that what Kiki meant to say? it’s probably close, especially if those things are carnivorous. Though it would be funny if it were suddenly revealed later that they were simply curious herbavors.

I think that’s what makes things so alarming, as it would for any of us. When you just don’t know.

We have younger readers too, so unfortunately no, but we may offer that kind of content in some form in a patreon down the line, if there is sufficient demand.

Fox Kiki is dope. That’s all I can really say

Yeah she is, we were wondering how fox Kiki would be received by the readers, so far so good!

That’s really cool how Kiki can change into animal form. This raises a question: Can others like Mimi do the same? I bet Mimi would be as cute in animal form.