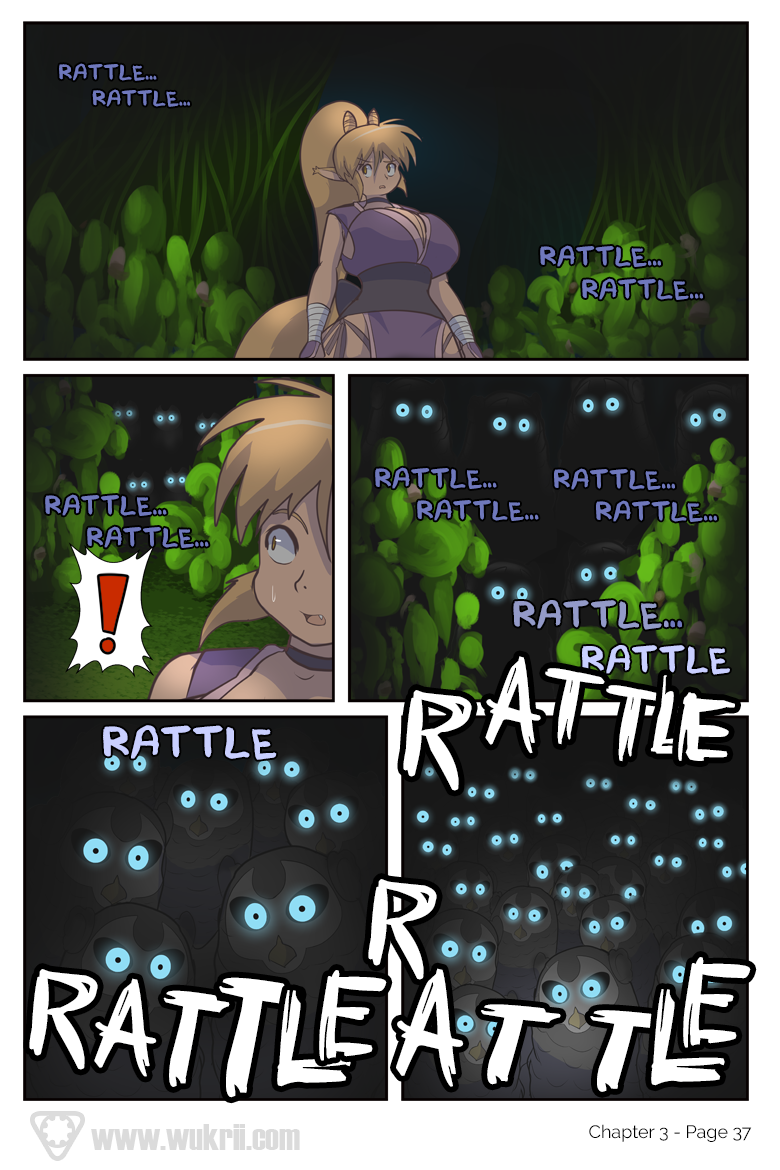 Meet a lot of chickens with glowing blue eyes do ya?

No but all farm fowl.have one thing I common, they know more than you think and can surprise the ever loving Colby out of you. Never tick off a bird of any kind they will make you pay. 😂

Never mess with the cuckoos. Because suddenly there are way more of them than you thought there were.

We can at least confirm that you cannot glide with these when you grab them.

Not unless we find a ? Block with a pair of yoshi Wings. 😁

It seems like Kiki is on the same page at this point.

I think she’s in the clear there.

Now is ninja vanish time, please tell me you can do that fox lady.

Judging by her reactions from the last pages, I don’t think she can. She’s screwed.

I rest my case.

Underworld71 Sadly we don’t have any star wars themed emotes to go along with that.

JoyKillz There is more than one way to get away…if she does, what way will she choose?

Hmmm, maybe both within and outside of the comic.

The moment you said that, Gatsu, I instantly imagined how many people would say “She’s going to use a ninja vanishing trick that may allow her to get away, but leaves her nearly, or completely naked, huh?”, Or worse.

And heck yeah we love kiki. She’s a voluptuous fox girl that’s a ninja, or assassin of sorts. I can’t tell if Mimi, or Kiki is thicker on the hips, but they’re both equally liked.

Makes me wonder if they like younger people, cause they would love my OCs xD.

Paintbrushdante They both definitely have their fans.

I too have wondered how their measurements compare to each other. I initially figured Mimi to be a bit fuller figured than Kiki, but Kiki is pretty well endowed as well so it’s hard to guess!

Maybe they are extremely distant relative where their genetic thick thighs genes have been past down by generations.

This is like when someone says “Oh yeah? You and WHAT army?”
Well, that army.

It always comes down to food, doesn’t it?

Ok, now that is scary. Darkening surroundings, rattling effect growing and growing and the horde of creatures just waiting and watching.
The glowing eyes and blank expressions make them so ominous, other animals like the Tikibi had definite personality in their expressions and body language. These just stare and rattle ever louder in greater numbers.
I’d say Kiki should run, but even if there are routes clear she doesn’t know the way out and could just be going further into their territory.

Kiki, if you have any more tricks, controlled combat wispfiis, shuriken, ninja vanish, now is the time to use them.

Maybe she does have more tricks not listed in your comment? Who knows? Maybe she just needs some spare donuts to toss at them so she can skedaddle.

Not a bad idea!

okay kiki its time to 🏃

That seems to be the growing consensus in the comments!

Like I said before Kiki face away from. These things and “Run like you’ve never run before!!!!” If these creatures don’t scare you like infinite Else/if loop I have to see your idea of fun! If it were me I’d also be pulling my best Curly impression “whoop whoop whoop, neyahaaa!”

A little brevity is certainly called for in this circumstance it seems.

Well, time to put on some traveling music and make like Karzhani himself is after you

I had to look up what Karzhani was. Welcome to the community Sharktic!

If I may it does seem appropriate, there is as you said hints of Hawaii in Wukrii and Bionicle was inspired heavily by Polynesian culture from New Zealand to Hawaii and beyond. Just a neat thing in my eyes that even as loose a connection as the sight Hawaiian influence here can be connected to another great work, Bionicle was awesome and so is Wukrii both in their own unique ways. If you take my meaning. 😉

Bionicle can I see. Hey I’m actually working on a project based off the movies, custom Matoran figurines, first up are Jaller and Takua.

I wonder if Kiki is feeling a bit, dare I say, *rattled* from this situation?

I see what ya did there.

Tune in next page to find out!

No but uh….maybe she has a few other ways of escaping this situation?

Late to the party, but running is obviously a very bad idea at point: She has no idea where she is and where to go and is unfamiliar with the terrain, while her “opponents” obviously know the area well, outnumber her at least 30:1 and, by the looks of it, have blocked all possible exits.

Unless she has some major weapon or clever escape trick that we don’t know of (unlikely at this point), she’ll have to somehow negotiate her way out of this.

As boring as it is, they not be enemies at all, but just gwaking. In that case she could walk away and hopefully find her own way out of the forest.

PS: And for storrytelling reasons she’s obviously not going to die here. She survived the transition from another comic, has a main character build-up and is the only designated antagonist…

I can’t say what the future holds for our fine foxy friend until she’s literally out of the woods first!