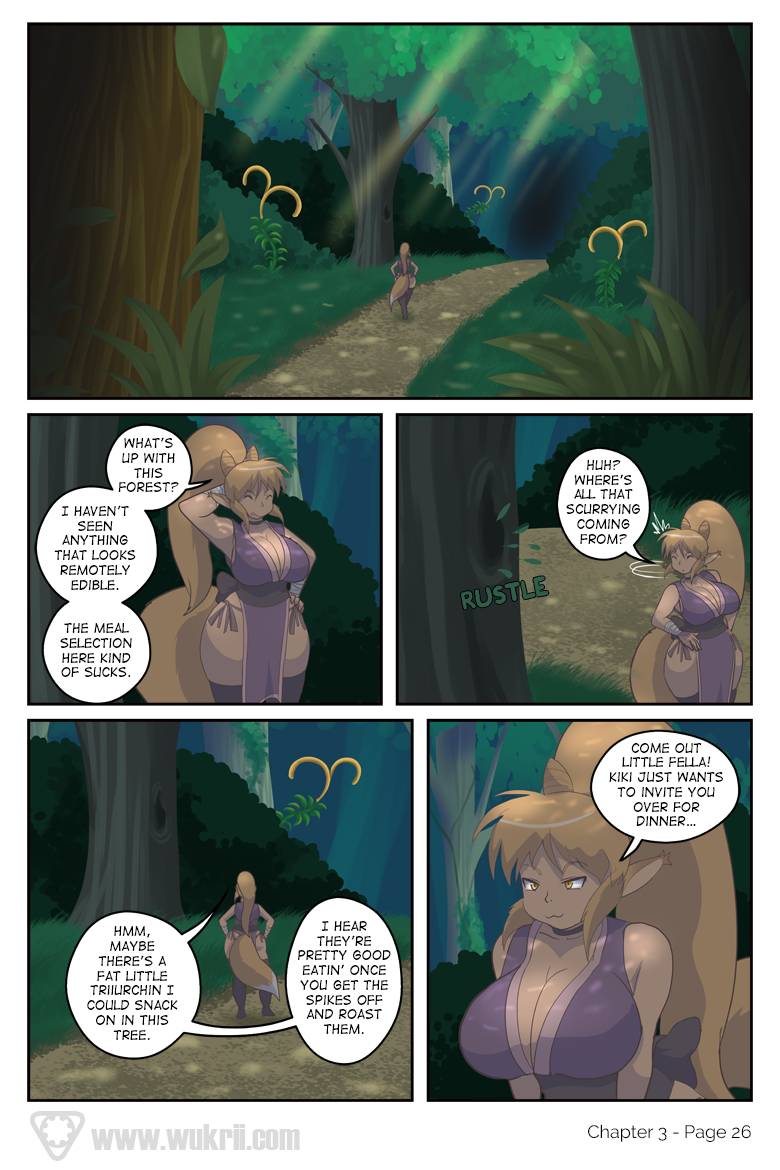 Well , seems theses plants around are waiting for Kiki putting her head in the tree hole …… Soon , butt spanking session ?

Hopefully Kiki’s not also sticking her head into an angry Triiurchin’s home!

Sounds to me like Kiki is opportunistic but only has the most basic of understandings when it comes to getting food from the surrounding environment. To be fair, I’m not saying she’s an idiot, I’m just saying it seems like she really doesn’t have any survival skills beyond the most basic stuff most people have. You know, the stuff that is repeated continuously in the media when wilderness comes up or everyone talks about when a book or show talks about getting food from the wilderness. I’m just saying that it’s likely Kiki’s skillset is directed somewhere else. If I had to make a guess, and going by what has been said about looks regarding humanoids in the series so far, I would say she’s more used to using her figure and social wits to get other people to do things for her and get things for her. But given she’s traveling alone, I would say she has some sense of self-reliance but it’s not that well suited for a wilderness setting and she misjudged the distance between her start point and destination, if she even has a destination.

But that’s just my read on things, and I’m going off some very limited information

Kiki can let her overconfidence get the best of her for sure. There’s more to Kiki then we’ve shown, but it’s interesting to read what folks think about her so far in the story!

I wish I could say more about Kiki without spoiling anything!

Stay strong, keep those spoilers locked away until the time comes.
It’ll all be worth it.

That’s why I’m zipping my lips as tight as I can. I can’t wait to read all the reactions to the surprises we have in store!

Wow, this is getting super interesting to the point where i think Kiki might go on a slaughter fest

The Triiurchins are usually seen as glutinous pest in Wukrii, so perhaps Kiki would be doing the forest a favor by snacking on one.

And don’t listen to the pretty lady Mr. triiurchin, she wants to make you the main course!

Someone one or something must still be using this path.

I can think of several nasty things one might find in a hole in a tree trunk….

“Roast”? I don’t see a fire, or anything that would burn. Unless she’s a fire mage? O.O

She might not be a mage, but she does have small flame kits that she can summon, maybe they can cook food for her

Wispfii are a cook’s best friend!

Lets hope the worst that could be in that tree is just a noisy triiurchin!

A few friendly wispfii could definitely help using their flames.

Oops. I thought the wispfu were more spirits than physical beings.

Kiki: Watch out small critters, this fox lady is hungry!
Kiuwi: (Still on his mail route) I have the sudden feeling the ‘bunny’ part of me is in danger.

I don’t think she’ll go that far but foxes are carnivores so I think she’ll prefer meat to fruits if given the choice.
A tree hollow eh? A Triiurchin could be in there … or maybe something else. That looks like something an owl could live in, and the marker on this path did look rather owl-like … I wonder.

Well, we’ll find out in due time. Until then whatever’s in there had better watch out, Kiki’s opened her eyes so she means business.

Kiki’s recipe for triiurchin stew is well worth it though!

Not even Kiki would want to harm our faithful flying furry little bunny dragon friends!

Kiki’s just checking her food options since she’s not finding anything of the vegetation variety to snack on so far. Plants are much easier to deal with than having to chase around a spiny triiurchin! We’ll see soon enough if Kiki bags her lunch.

Kiki’s got her hungry fox face on and is ready to feast!

Without any context, that last panel could be quite worrisome.

Reading back at past comics, there’s so many panels I’ve made that could be weird without the proper context!

If she’s lucky, it’ll be something that wants to invite her over for dinner.

If she’s unlucky, it’ll be Nini.

Either way, Kiki would be in for a surprise from the results of both scenarios!

those plants are giving me suspension….

A girl’s got to eat when they’re on a long walking trip like Kiki.

Fruit is much easier to catch at least!