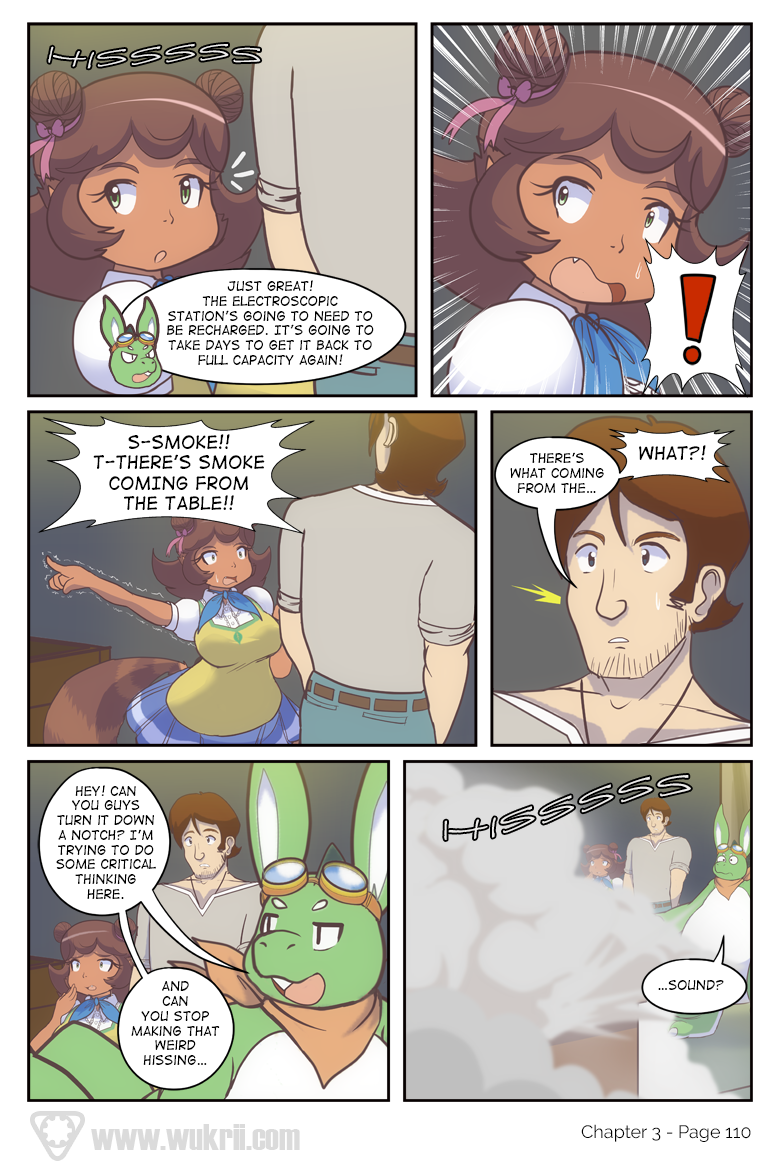 could be a bit of both, that can happen sometimes.

It does have two valves, so perhaps two flavors of gasses.

Henceforth it shall be known as Smeam!

As the smoke fills the room, an ominous silhouette can be seen through the thick haze, and a menacing voice booms out:
“I am the terror that flaps in the night…I am the dead batteries in your smoke detector…I am Darkwing Duck!”

This got a minor chuckle from me.

Haha, same! Doesn’t seem out of place for Darkwing Duck.

Then the Disney ninjas attack my house and destroy my computer for copyright infringement!

I totally wouldn’t mind a Darkwing Duck cameo in the comic if we could.

Welp from 3 plus months of awall to just 2 flipping hours.

and it’s only now getting good my luck

We’re excited to show these cool parts of the chapter!

“You have three wishes”

Maybe this is like a robotic genie! Shock the lamp, summon the genie, and make your wishes!

Just don’t let Rao near those wishes, or he’ll waste them on a new screwdriver, a new electroscopic station and a box of infinite doughnuts!

Question : have you already seen the horror movie “The fog” ? …… I have

I haven’t watched the fog, but I’ve seen enough Silent Hill to know where this is going!

Well, it took them long enough to notice. I still think the robot is going to start off speaking in an extremely old dialect, and I still think it would hilarious if Mimi was the only one that can understand that dialect. But after it samples enough of the modern vernacular of where it is there’s a good chance it will change gears to speaking the common tongue, which will probably put Matt and Rao off guard, for different reasons, but Mimi probably not register the change as jarring if we are operating on the assumption she’s familiar with situations… Read more »

I have a feeling everyone would be speechless just seeing this thing even be able walk on its own! Can’t imagine how everyone would react if it speaks!

Rao is starting to get the feeling he should have stayed in bed.

Hopefully that’s steam, not smoke. On the off chance it is smoke I wonder if Rao installed a fire sprinkler system in his workshop.

Now that everyone’s on the same page, time for ominous robot movement.

This maybe the last time Rao spends his day off doing Jigin a favor.

As much mechanical work as Rao does, I’m sure his garage is especially equipped for fire related emergencies (He is a fire breathing Drabbunny after all!).

Now that was unexpected…what will step out of the smoke / steam???

Hopefully nothing too spooky!

If there’s trouble with the ancient machine, they might have to call DW!

Smokescreen! Now for the dramatic entrance! Or exit!

Now they just need some laser lights and they’re close to having a sweet rock concert opening in Rao’s Garage!

Now it’s full steam ahead with getting it working again!

Wow… Rao can be a little… slow…