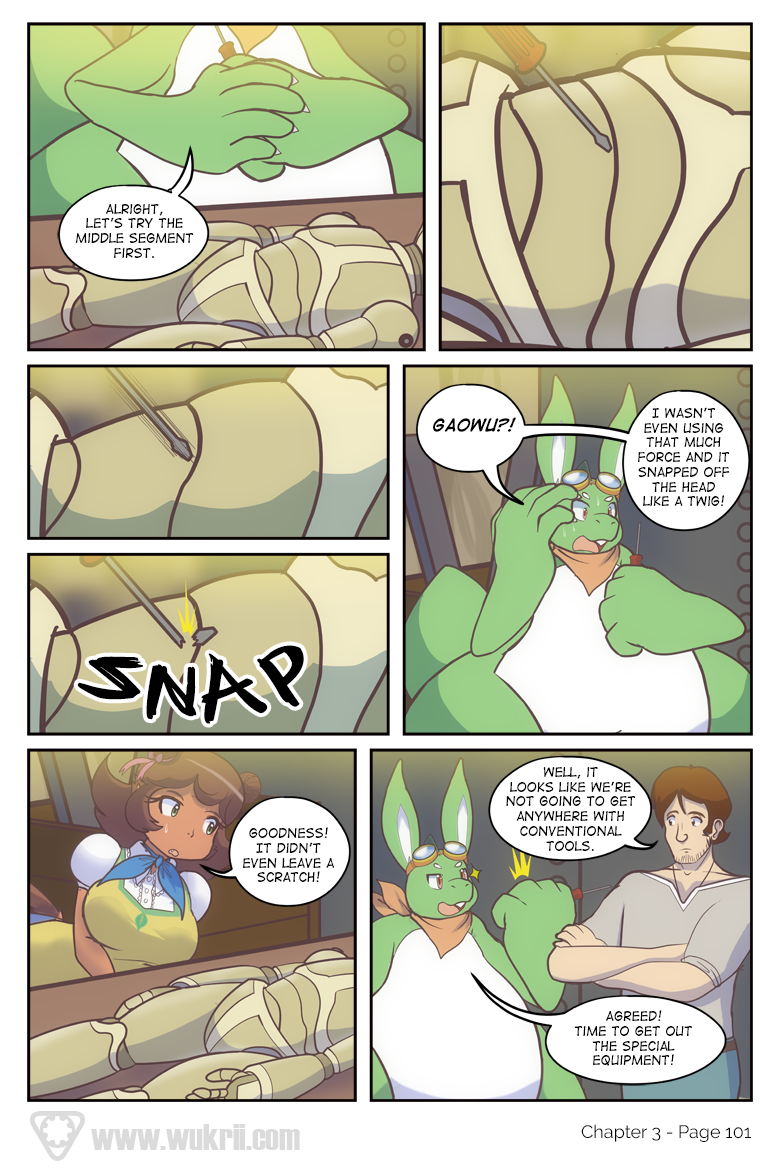 I think it’s cute when he said that !

Even Rao succumbs to the cuteness of saying

You heard the man: Bring out the jackhammer and dynamite!

He’s going to end up taking out most of his garage and yet still not make a dent in the artifact!

Seeing how it appears that conventional means aren’t a way to open the robot can we deduct that there might be a key of sorts?

If there is a key, lets hope the key is in the container it came from!

Why do I get the impression Rao’s special equipment involves an arc welder, blowtorch, and a water saw?

Mathew was hesitant with him using a screwdriver, so he may blow a gasket with any of those tools!

Honestly, I figured Rao might just have those sorts of tools on hand, and I can totally see him basically building a water saw to help him out due to the potentially flammable materials he sometimes works with, having a tool that isn’t going to cause sparks to fly if you goof that can be used in a wide variety of ways sounds like it’s in Rao’s wheelhouse, to me. Also, water pressure can be pretty scary when it’s basically all directed towards a single target.

Rao strikes me as the kind of guy to build a tool to do as many jobs as possible if he doesn’t have any for that job or thinks what he has on hand isn’t good enough to do the job.

…
You know it might just be for the best to wait until sunset, the last thing we need is to anger an ancient mechanical god by stabbing them.

With the way the screwdriver snapped, maybe it didn’t feel a thing…I hope.

Given how strong and dedicated to mechanics Rao is said special equipment will be interesting to see.

These are the screwdriver sacrifices we have to make for science!

If he wasn’t using that much force… then how did it snap? Usually tools have some flex to them to prevent something like this from occurring, so maybe the material the bot’s made from drained the durability from the screwdriver to prevent its own damage? Or it defied physics, broke Newton’s Laws, and reflected the force applied upon it, resulting in the screw driver taking both the opposite force and the force it was supposed to be applying (Equal and Opposite reaction bit) (Like Captain America’s shield!)

Yeah my thinking too, maybe it’s a case of not knowing your own strength?

Maybe this metal has some physic defying force applied to it.

Then again, this is the same world with flying dragon rabbits in it.

yeah but they’re not flying -mist- rabbits, physics still applies.. it could be some kind of highly aggressive mercury type impurity being leached into the metal.

Look on the bright side Rao, now you get to go shopping for flat head screw drivers and proper prying tools.
(in the event you don’t have Prying tools already)

If there’s anything Rao loves is finding an excuse to buy more new tools, toys, and tech!

Lets hope whatever Rao has in mind doesn’t turn his cave into a crater!

Talk about unknown metals, dang, I wonder what it was used for, maybe it is some ancient super guardian that was sealed away because it was too powerful to be controlled, or maybe when it had done it’s job they sealed it up for when they thought it would be needed again, like some special defense system, so many ideas of what it was used for, would explain why tool grade steel would snap upon contact, definitely used for a purpose that would require a strong and virtually indestructible metal body that couldn’t be harmed, just trying to wrap my head around it is probably giving me a headache like Rao losing a new screwdriver that just broke on it’s first time use, and i know it all too well losing new tools that broke on their first use, poor Rao, RIP Philips Flat head screwdriver

Something built that strong definitely can’t be made just for house work!