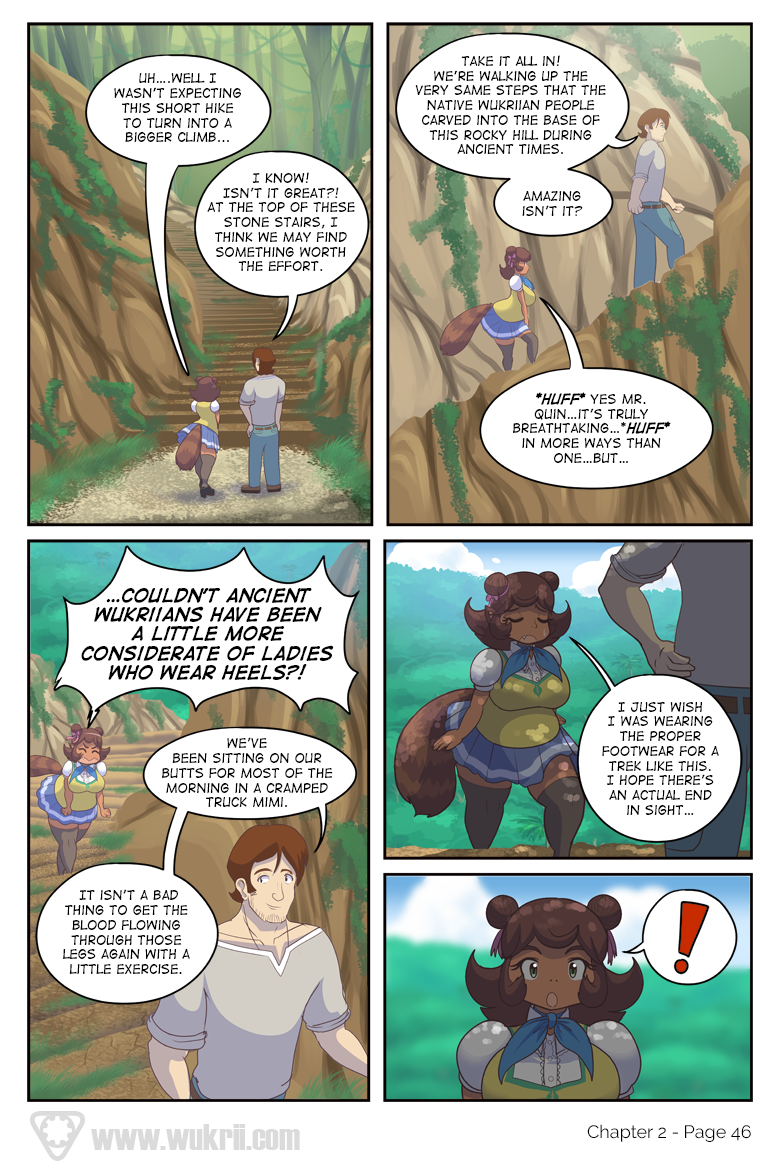 Uncomfortable heels AND getting winded after going up a ton of stairs? Mimi, you become more relatable everyday!

In all seriousness though, I do love Mimi both as a character and as a design. It’s nice to see a fellow plus-sized lady in a comic. Considering how many female characters are portrayed with huge busts in comics, it’s always surprising how few are curvy anywhere else aside their chest. She’s also just plain adorable too.

Hey Briana, thanks for reading and commenting! We always intended to have a variety of shapes and sizes with all of our characters, and voluptuous ladies were part of that for sure and will continue to be.

We’re really pleased to hear our female fans enjoy these characters too. We wanted to put things into the comic that people of different tastes, fandoms, etc would like.

Mimi can make some fearsome faces when she wants to!

Yeah considering the walking Mathew has them doing just on the first day maybe Mimi should invest in some walking boots. Or at the very leasts flats.
Mathew said Masubizu was a fish Wukrii? I’m betting they come to a water feature, a tranquil lake perhaps.

Hey Evil Tree, I think you mean a fish “Wukai”. Wukrii is the set of islands they are on, the Wukai are one of the three primary species that inhabit it (not counting our beloved drabbunnies of course).

Oh yeah, sorry about that.

Hold on, looking back page 45 spells Wukai with two “i”‘s, is that a typo?

Just checked it and corrected it! One “i” too many there in “Wukai”!

Thanks for pointing that out Evil Tree!

Nice to see Mimi has some sense of practicality, chances are after we see whatever she’s looking at and they finish their errand she’ll start going around with at least one pair of hiking boots just in case she finds herself on an impromptu expedition again.

Mimi strikes me as the kind of person to prepare only for what she expects and anticipates but nothing beyond that, by comparison, Quin (and probably Jigin) is more about preparing for everything he can think of, and keeping a few things handy in case he has to do something unplanned.

Quick sidenote here, mostly because I think it is mildly relevant here, Shinobi (males are called Ninja and females are called Kunoichi) have survival as one of their core skills for training and have a grappling hook (with rope) as one of the essential items that they should never be without, grappling hooks with a line are great, they let you scale surfaces, make impromptu bridges, and can even be used as a weapon should the need arise. That all said, I don’t think Mimi has or will meet the requirements for being a Shinobi, seeing as they have to keep themselves within a set weight limit at all times and have a very restrictive/exclusive diet, being a master of stealth, survival, and infiltration requires your body adhere to quite a few specific rules. I recommend checking out Gaijin Goomba’s Which Ninja series, it’s a good starting point should want to have ninja or ninja-like characters show up at some point in the future, and is fun series in general (in my opinion)

A strict weight limit, what are you tryin’ to say huh?!

Fans, and certainly Mimi really like her outfit, so I don’t know if scaling the highest mountain would be enough to get her to ditch those heels. It’s possible though!

I am pretty sure the first ninja girl I saw in an anime was “Kagero” a Koga kunoichi in “Ninja Scroll”. And you never know Dracone, maybe you will see a ninja-type girl in the future perhaps? Or maybe we have hinted at it already? Who’s to say… (other than us of course). Gotta stay tuned!

As for Gaijin Goomba’s series, we will be sure to check it out, thanks for the recommendation!

I know Mimi was trying to make a good impression, put her best foot forward, so to speak–she just didn’t know that foot would be required to carry her into the wilderness…..

Mimi is one of those gals that prefers not to leave the house without looking her best. The things some do for fashion right?

Climbing a Mountain in Heels?
Wow Mimi, What won’t you do?

Mimi will go to great lengths and heights in heels to learn more about Wurkrii culture!

I hear ya, but it’s the price one must pay to get to really cool places sometimes. Or to just burn off a few calories.