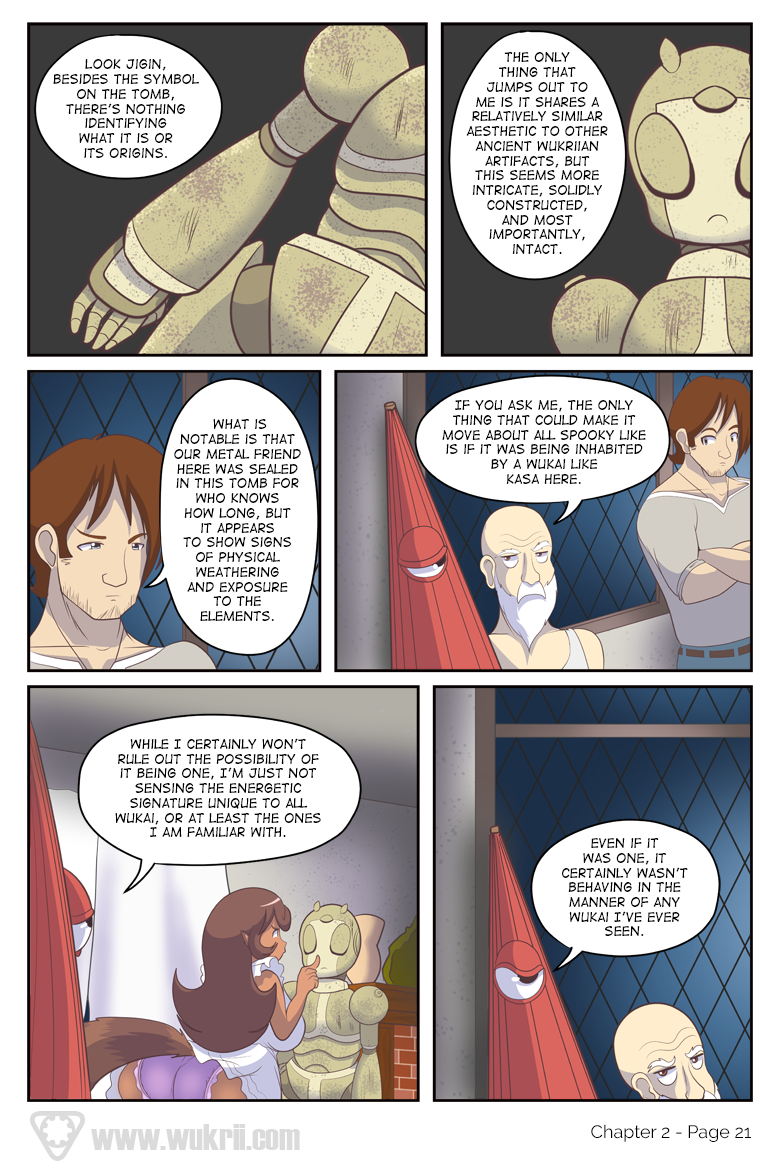 Ohhhh, I see! So that’s what make the umbrella talk and think! Heh I had to read about 3 times to understand what they’re saying (since English is not my first language). Very interesting! Wukais can possess inanimate bodies (objects). The suspense is also good because I just can’t wait for the robot start to do something! Over all nice page 👍

Thank you Nirozu! I’m glad to hear you’re still enjoying the story even with the slight language barrier! The Wukai are mystical beings and there’s still much to reveal about them! Lots more mysteries and suspense ahead!

Looks to me like Mimi is getting a bit close to it again, what if its eyes become active and it does some sort of registration of command with her? That would actually be kind of amusing, mysterious robot basically only listening to the least experienced person there.

Moving right along, I’m remembering pieces of a few of the tales of Talos, are you familiar with any of them?

Not really. Are they similar to this?

Sort of, I’ll just give you the gist of things. Talos was a man made of bronze forged by Hephaestus, but he was also a giant. Anyway, Talos was so well crafted he was said to have a personality and feelings, he also got driven mad by one of the Greek goddesses because she thought would be funny. But before he went crazy, he was designed and instructed to protect and guard the island of Crete, and did until the whole goddess making him mad thing

Not to worry, Mimi is a trained professional poker of things! If it does wake up, hopefully it’s less spooky like as Jigin would say!😖

Also thanks for the further cool info Dracone! As always, Greek gods are big bullies. We certainly have some interesting things in store for our metal friend here to reveal down the line.

That all said, Greek, Roman, and Norse mythology are a bit too overexposed these days. Egyptian mythology to a lesser extent. Japanese mythology has been slowly bleeding into the public consciousness the past few decades, this comic is proof that. One type of mythology that doesn’t get enough exposure, in my humble opinion, is Celtic mythology. Now, with all cultures that’s a pretty wide stroke, especially when you realize just how far extended the Celts were before the rise of Christianity in Europe. I recommend starting with Irish mythology and lore, seeing as it is the most intact when it… Read more »

Hey there, I’m actually very well versed in mythology in general, and particularly Celtic myths and culture. We have years and years of content of all kinds planned out, and you can definitely expect a wide variety of cultures, and manifestations of those cultures, to be seen as the comic goes on. We have lots of fun stuff in store!

Another good page.
I feel it’s important to have at least a page dedicated to the experts debating the robot’s nature and origin. Cementing their status as experts in their fields, showing their genuine interest and curiosity and developing the lore of the comic.

We want to make sure all the characters have space to develop and show off what makes them unique for sure.

I’m all caught up and I see all the parallels to Youkai.

Hey there Hakuzo, we got inspiration for our Wukai and other creations from a lot of different sources, and we certainly love Japanese mythology. Thanks for stopping by, and we hope you’ve enjoyed the comic so far!

Hello! Just started reading, and I love the style! Wanted to let you know, though, that you put “manor of” but it would be “manner of” instead. Sorry to be a bother!

RVWIV ! I’m so glad to hear that you’re loving the comic so far! Welcome to the Wukrii community!

Thanks for pointing out the spelling error! Just made the fix!